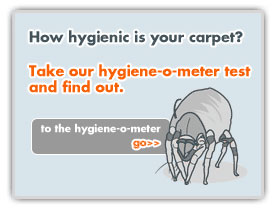 What’s lurking in your carpet?

Recent research commission by the Institute for Total Carpet Hygiene (ITCH) revealed that even after a carpet has been vacuumed, there are all sorts of nasties hidden within the fibres.

Samples from three different homes were analysed as part of the research. All of the carpets had been vacuumed prior to testing and then washed using a Vax Rapide Deluxe. The dirty water from each was then sent to Reading Scientific Services Ltd (RSSL) research lab for testing. Here’s a summary of what was found:

Case Study 1 - Family with two children aged 1 and 5
The carpet is vacuumed regularly and the family often walk around bare-footed. As the one year old is learning to walk, he will often crawl on the carpet and both of the children regularly play on the floor.

The most shocking find in this sample was the relatively high level of rod-shaped bacteria which can lead to infections and even food poisoning.

The sample also contained a number of man-made synthetic and natural fibres with some feathers and few hairs, some of which were thought to belong to a small mammal such as a cat or a rodent. Fragmented pollen grains and some arthropod/insect remains were found.

Case Study 2- Professional couple
The carpet was thought to be very old and had not been replaced since the couple moved into the house a few years ago. The carpet is on a main walkway through to the garden and is often vacuumed to get rid of excess dirt.

This sample contained more than twice the mass of solid material (dried) compared to the other samples as well as high level of human and animal hair which was thought to be cat and possibly rodent. A larva, thought to be that of a white-shouldered moth and 10 – 12 weeks old, was also found.

The rest of the sample contained a fine-grained mud-like sediment which had dried to form a hard layer along with several arthropod/insect particles, some of which were thought to be from the woodlouse family.

Case Study 3 – Single professional
This carpet had only been laid within the last six months and like the other samples, was vacuumed regularly (at least twice a week).

As expected from a new carpet, this sample contained less solid material (dried) than the other two. However, like the first sample, it was found to contain a relatively high level of rod-shaped and potentially harmful bacteria. A large number of squamous epithelial-type cells that were considered to be skin cells were also found along with a moderate level of fine-grained sediment and a single insect fragment.

If you would like to read the full research report carried out by ITCH please download it below.
The report is in PDF format so you will require a copy of Adobe Acrobat Reader or similar software.